Meliksetian | Briggs is pleased to present Some Women, a new series of paintings by Christiane Lyons.

Lyons’ practice continues to be driven by an ongoing investigation into the process of painting and the use of appropriated material to recontextualize images and provoke new meanings and visual interpretations.  Often, Lyons’ sources are taken from the art historical canon, reflecting her interest in the production of art and the historical and social context in which art works were produced along with their resonance in the contemporary world.

In this body of work, Lyons returns to primarily painting the figure, in particular the female figure, exploring the notion of “ideal beauty” through the distortion of the female body, while drawing upon the foundational, primary elements of painting. Interested in artists such as Pablo Picasso and Hans Bellmer, who at times distorted and reconstructed the female figure, Lyons recreates the figure from a female perspective in relation to the feminine beauty ideal. Manipulating found imagery, Lyons chooses compositions that follow traditional modes in the representation of women in the history of painting – portraits and figures, standing, sitting or reclining.

With titles like Laura:  Arrangement in Silver and Intense Black, Lyons combines the first name of a personally influential female artist with a device used by the painter James McNeil Whistler, who titled his portraits as arrangements of color to direct the viewer’s attention to the artist’s manipulation of paint. Paradoxically, in addition to making the viewer aware of the artwork as object, as Whistler does, Lyons personifies the paintings with the female artists’ names.

The women in Lyons’ paintings appear in states of flux, constantly fluid as they morph into one another. This fluidity reveals the artist’s interest in the multiplicity and transient aspects of contemporary culture and how these ideas manifest themselves in our standards of beauty. Through the artist’s intentional use of fashion photography due to its universal reach, these ubiquitous images come to visually suggest the ideal female. Her Women serve as a metaphor for women’s condition in a contemporary culture that is obsessed with optics and an endless pursuit of the current perfection. 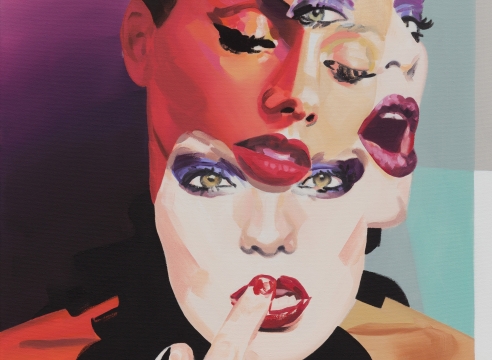