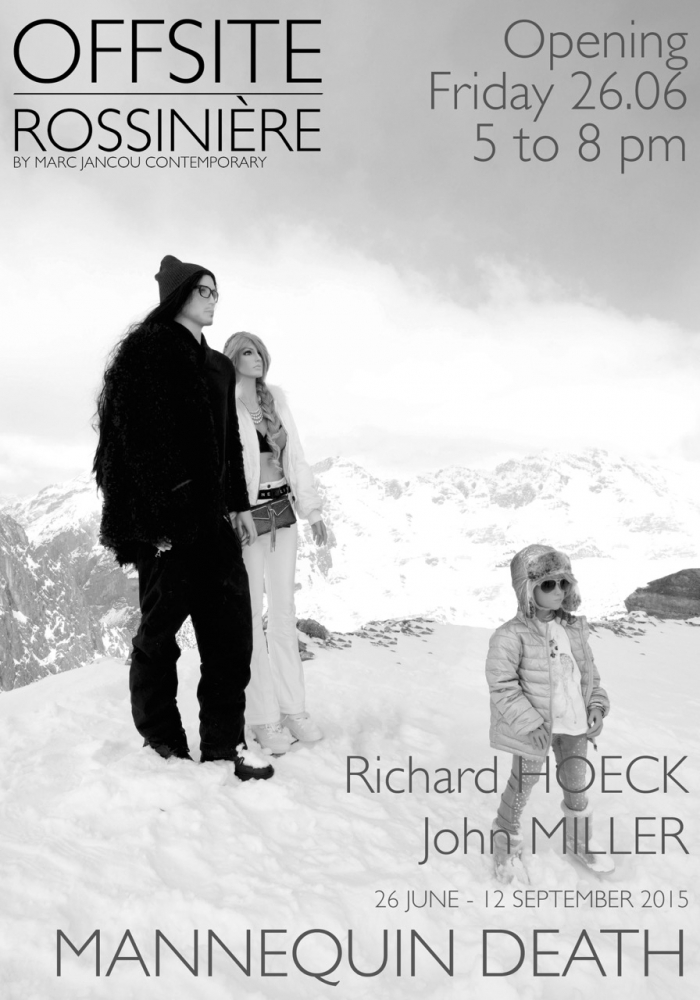 On the occasion of the second OFFSITE edition, Marc Jancou Contemporary is pleased to invite Richard Hoeck and John Miller to show their project Mannequin Death in Rossinière and Geneva. Rossinière is located in the Riviera Pays d’Enhaut district in Vaud Canton.

Exhibition in Rossinière will complement an installation made by the two artists in our Geneva Gallery, rue des Bains 63, during the same period. Miller’s and Hoeck’s Mannequins will be visible threw our window during all the summer.

John Miller about the project: "Richard Hoeck’s and my “Mannequin Death” project resulted from a proposal for a public work in the Südtiroler Siedlung in Innsbruck. For this, we wanted to register, in some way, both historical immigration within Austria from the Südtirol into Innsbruck and the Tyrolean Alps as a sublime landscape. We considered the paintings of the German romantic painter, Caspar David Friedrich, in which the representation of observers seems to be as important as the grandiose scenery that surrounds them. Because these figures (often silhouettes) are clearly stand-ins for the viewer, they constitute a kind of empty – or variable – subject position. With this in mind, we decided to put together a set of three familial figures (mother, father and daughter) and to shoot panoramic photographs of them in the Alps.

We called this constellation “Mannequin Pioneers”. Last spring Richard took the mannequin family into the mountains along with wildlife photographer Patrick Centurioni. Richard’s partner, Kasha Fiedler, styled them. Because the paths were still icy, it was a precarious shoot. Everyone had to be cautious. Otherwise a mannequin – or even a person – might slip over the edge of a steep cliff. Even so, it seemed that this very threat of annihilation is just what distinguishes the sublime from the “merely beautiful”. To further draw out this potential, we decided to assemble a group of ten mannequins and to videotape them falling from the edge of an Alpine cliff to their destruction. In addition we will photograph their remains and display them as a kind of evidence."

Richard Hoeck and John Miller have had a 20 year long history of collaborations including exhibitions at the Kunsthalle Wien, Vienna and at KW, Berlin as well being included in various group shows in Europe and United States. They’ve shown Something for Everyone at Art Basel Art/Film curated by John Armleder in 2004. Born in 1954, Cleveland, Ohio, John Miller lives and works in New York and Berlin. He is the recipient of the 2011 Wolfgang Hahn Prize, which coincided with an exhibition at Museum Ludwig, Cologne. In 2009 Kunsthalle Zürich held a retrospective exhibition of his work that was accompanied by a catalogue published by JRP | Ringier. Richard Hoeck is an Austrian Artist born in 1965. He lives and works in Vienna and New York. He studied at Universität für angewandte Kunst,Vienna. He is the recipient of the Blinky Palermo Prize, GfZK, Leipzig. He has exhibited widely in Europe and most recently in China. He is part of the exhibition : ohne titel (in Green)with Heimo Zobernig from July 18 to September 15 at Meliksetian Briggs Gallery, Los Angeles.

Mannequin Death runs from June 26 to September 12, 2015 in Geneva and in Rossinière at Pays d’Enhaut, simultaneously of the Festival Alt. +1000. The exhibition in Rossinière is open Tuesday - Sunday, 10:30 to 6:00 p.m. For more information, please contact Joseph Favre geneva@marcjancou.com.