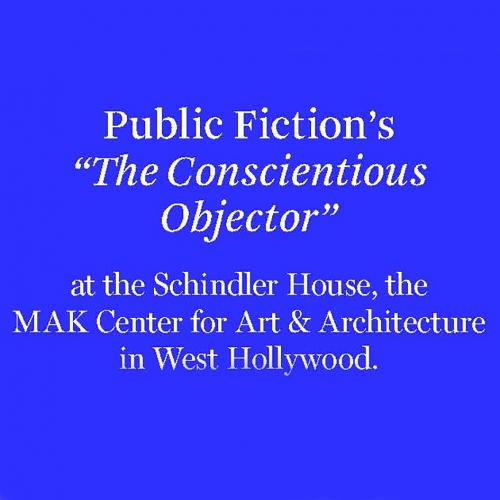 MAK Center for Art and Architecture

Public Fiction’s The Conscientious Objector is a multifaceted endeavor that unfurls in parts from February to April 2018. It comprises a publication, a series of artist-made commercials for television, an exhibition of artworks activated by performances, and public programs.

To be an object, is to object

Set in West Hollywood, The Conscientious Objector considers how art and culture can establish acts of resilience through ‘non-participation’ and elliptical routes, in contrast to more blatantly socio-political forms of resistance, as well as the ways in which they might use the tropes and platforms of entertainment, advertising and mass culture to reach its audiences. That is, without making any assumptions about who these audiences are.

The overall project is an exploration of different modes or degrees of ‘public address’ – most obviously through a live confrontation with actors in the exhibition, at a step removed via TV commercials, more obliquely via individual artworks, and in the longer term through the publication.

The Conscientious Objector at the Schindler House presents new and existing works by Sam Gilliam, Anthea Hamilton, Lucy McKenzie, Dianna Molzan, and Suki Seokyeong Kang, plus a new durational performance delivered by professional actors and directed by Todd Gray. Each artist inhabits a different room of the Schindler House, which is progressively activated by a performance that employs the publication as script and prop.