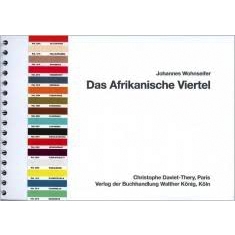 The title of this artist s book is derived from the quarter of the same name in the Berlin district of Wedding. Johannes Wohnseifer produced 19 different wooden sculptures, each made using eight wooden elements whose configuration is altered in each case. The elements used are based on Gerrit Rietveld's "Berliner Stuhl", a chair he designed for the Juryfreie Kunstschau in 1923. Each of the 19 sculptures are named after a different street name in Berlin s "African quarter" and thus also confront the historical problem of Germany s colonial past, readable in the naming of this district. The sculpture series was begun in 2009 with a solo exhibition at Galerie Johann König in Berlin. The first seven sculptures in the series, whose forms are reminiscent of book shelves, were shown. This, ten years later, is the complete catalogue of these works, which, very much in keeping with Gerrit Rietveld's vision, can also be used as an assembly manual. Each of the sculptures is represented with precise measurements and the ordering of the wooden pieces, including the RAL colour numbers used as well as an exploded view. This book is closely related content wise to the artist s book "Canon" published in 2016.