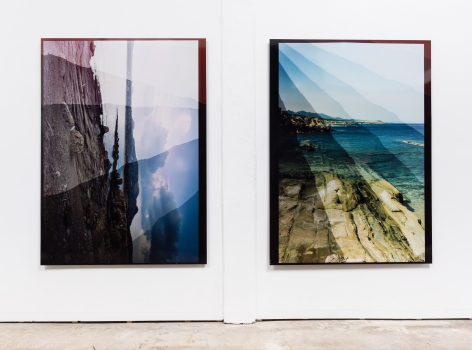 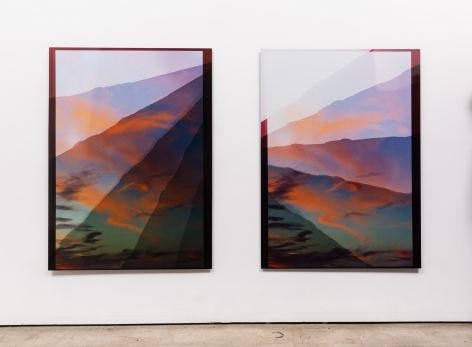 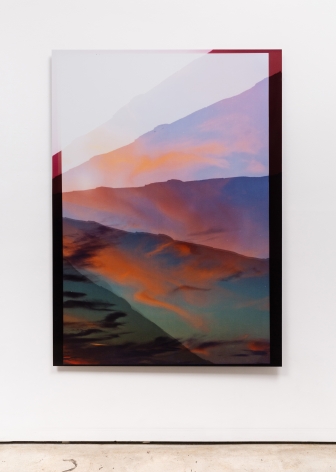 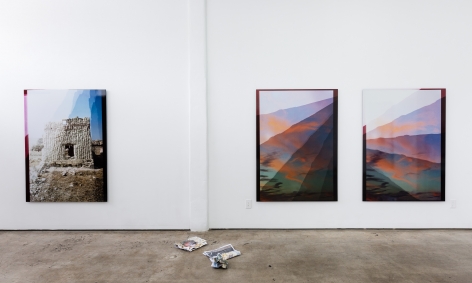 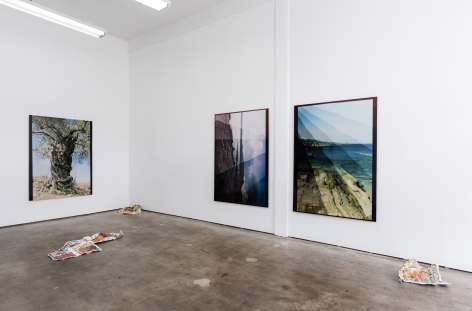 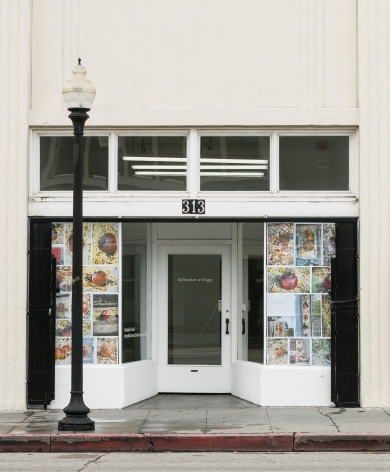 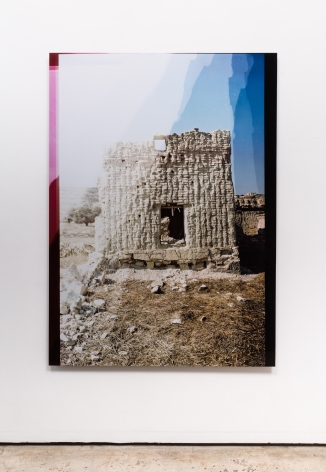 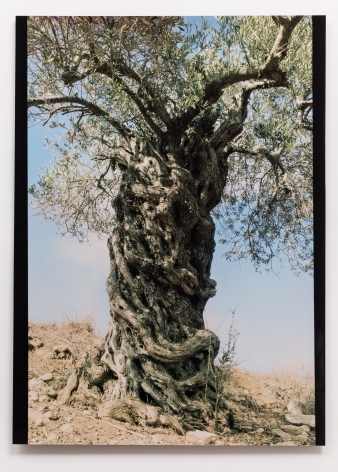 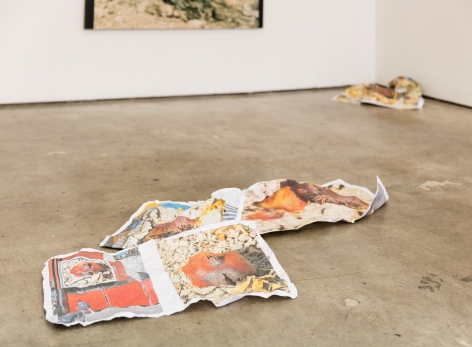 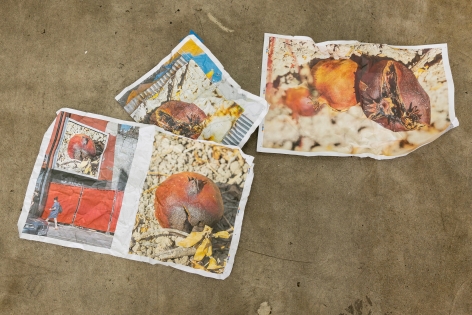 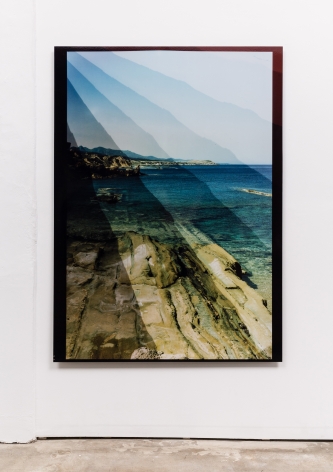 Meliksetian | Briggs is pleased to present Recollections of Underdevelopment, a new series of photo-based works by London born and based, Cypriot Turkish artist, Mustafa Hulusi.

Hulusi uses photography, painting and video to, in the words of critic and art historian Sir Norman Rosenthal, “depict, obliquely sometimes, the story of Cyprus as a location for the cultural engagements, not always happy, that this island has lived through over the millennia.”

The six large-scale photo works in this exhibition have as their subject the island’s rustic and scenic Mediterranean landscapes. However, Hulusi complicates the easily consumable, romanticized imagery with political reality through an artistic intervention, disrupting the uncritical digestion of the images and the logic of their aestheticization. This series is an eloquent utilization of photography’s critical potential thatevolves from two seemingly contradictory tendencies, the one aestheticizing and obscuring, the other fragmenting and exposing.

Underlying the picturesque images is the dark history of this region of Cyprus where ethnic cleansing and depopulation took place as recently as 1974. The division of the island in that year into Turkish and Greek territories respectively, had purposes both political and military. Politically, to suppress leftist or non-aligned politics which threatened US and European hegemony, and militarily, to create a NATO frontier on the Eastern flank of the Mediterranean facing Syria, a significant geo-strategic region of the Middle East. The front for NATO is no longer the ground but the air above and the electro- magnetic field - through GPS weapons systems -drones, satellites and high altitude aircraft – proving theorist Paul Virilio’s ideas first espoused in the 1990s about the new verticality, as opposed to the traditional horizontality, of contemporary warfare.People have been cleared out of the region so as not to dispute the territorial actuality that facilitates this.

The photographs’ bucolic landscapes are the result of a “walk through nature,” in a region once inhabited by the artist’s family, echoing the style of the photo-documented art of 1970s Land Artists, an act infused with the ideals of Romanticism. Hulusi disrupts the images by superimposing grades of differing exposure times into them by hand, delineating the territory above and within the landscape, suggesting a manifestation of Virilio’s ideas. This self-reflexivity reveals the chemical processes of photography, dividing the picture plane into different exposure times; an analog technical process normally used to calculate the ideal picture exposure, being used aesthetically and critically, to expose the photographic medium with its claims to both truthfulness and fabrication in the age of digitization. In doing so, Hulusi invites us to contemplate similar contradictions and paradoxes in what is being photographed.

The timelessness and peace of the natural landscape contrasts with the island’s tumultuous history and as well, the current violence in Syria, located just across the water. There is a gritty earthiness to the images - empty seaside beaches, a lone tree, an abandoned building. Extending outside of this visual perception is the conception of militarization within human history, the grand narrative being a story of successive battles and wars through the ages. As Rosenthal says, Hulusi reflects on “ruins and the abandoned places of lost civilizations” while suggesting an idealized place, with the landscape in a primordial balance between harmonyand beauty, and at the same time referencing socio-political history and the mechanics of image making.

Mustafa Hulusi (b.1971, London) got his BA in Fine Art and Critical Studies from Goldsmiths College, London and his MA in Photography from the Royal College of Art, London. He also holds an MA in Critical Theory from Central St. Martin’s School of Art, London. 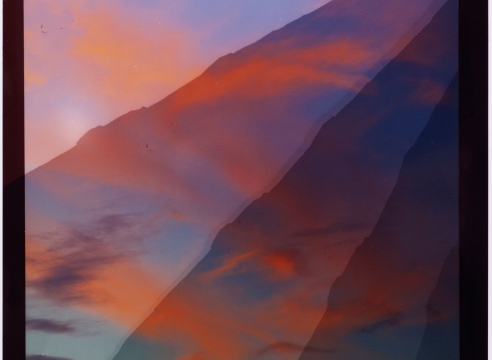 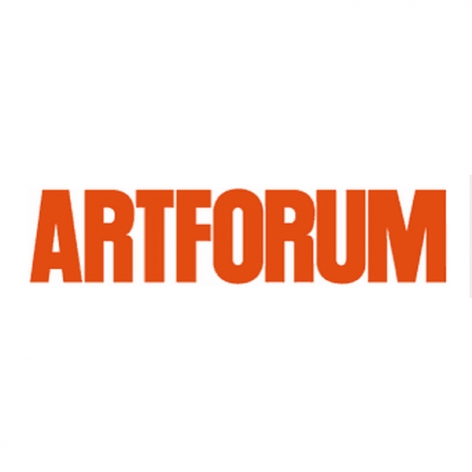 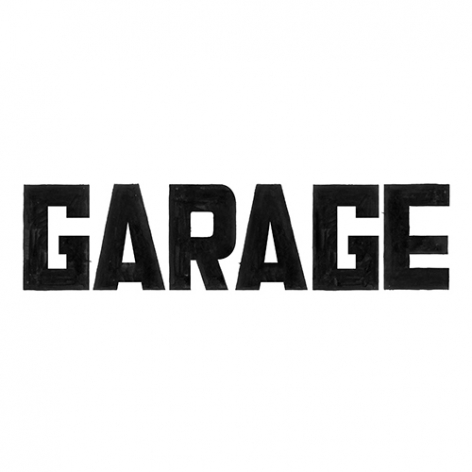 Mustafa Hulusi talks about Mad Max, Tarkofsky and social media in an interview with Garage Magazine.